To allow you to rapidly experience the value proposition of fastCode, we have provided a sample database for a Timesheet application. This database has 9 tables.

In order to generate an application that uses the sample database, first click on Create Application button in the Application Generator Portal screen. This will bring up the application generation wizard where we need to provide information.

Below, we describe the information that needs to be provided to the application generation wizard on each screen.

The first screen requires you to provide information on the database to be used to generate the application. In order to use the sample database, select Use sample database radio button. This should bring up the screen shown below.

Click the Next button to go to the next screen.

The following application information is pre-filled because it's a sample application.

Repository Name: The name of the repository that will be created in fastCode's GitHub account.

Application Name: The name of the application

The next two fields, Group and Artifact, together constitute the Java package name that will be used when generating the application.

Click the Next button. The application generator will perform initial checks and take you to the next screen. 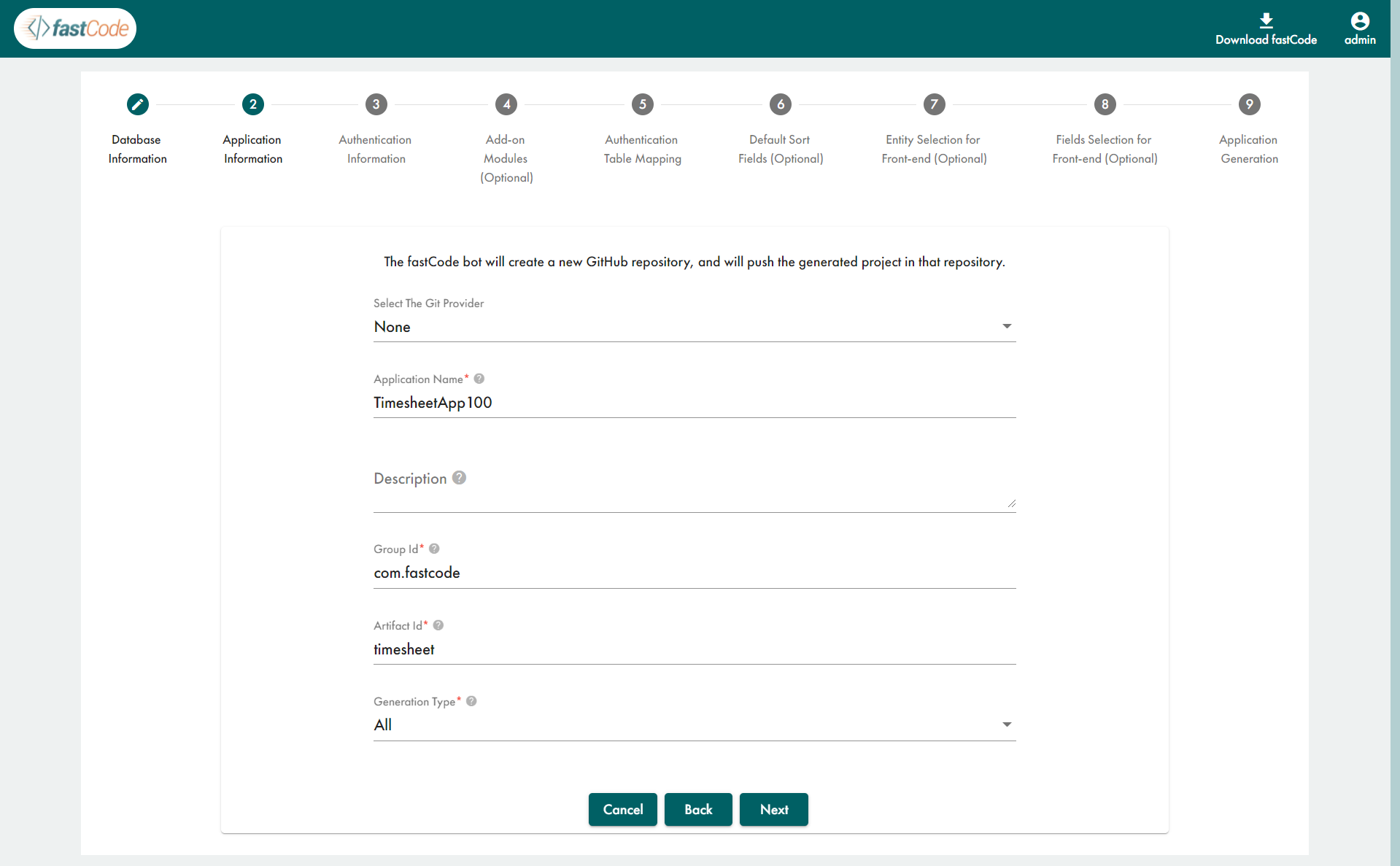 For the sample application, we will use database authentication and store user credentials in the application database.

The sample Timesheet database has a User table (named users) and therefore we have selected Yes as the option.

In this step, we select optional add-on modules that we want to include in the generated application. In the current community version of fastCode, the following add-on modules are supported: 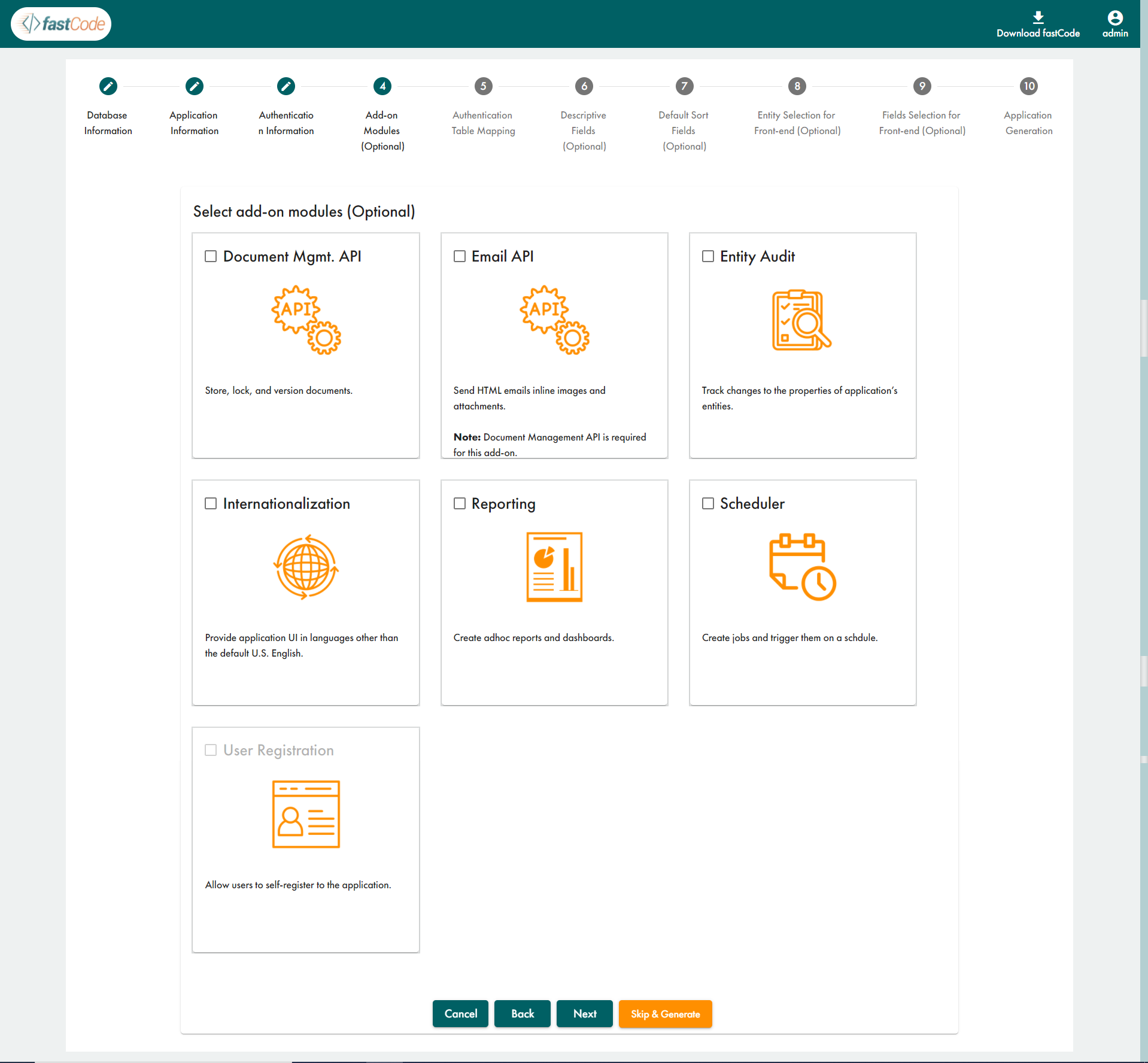 The document management API can be used by the application development team to store, lock, and version documents (ex: Pdf, Word, images). Documents can be stored in the application’s database, a file system, AWS S3 buckets, and other locations, although only the File System store is supported in the current release.

A job is a Java method that will execute when triggered. Initially, the application development team develops jobs (Java methods) and these jobs can then be triggered by setting up trigger schedules through the Job Scheduler UI.

This step only appears when the database schema has a custom User table. In the case of the sample Timesheet application, we have a users table in the database schema. In this step, we need to map fields in the users table to the fields that correspond to UserName, Password, EmailAddress, and isActive. In case you have selected the **User Registration" add-on, an additional field, isEmailConfirmed, also needs to be mapped.

For this step, for each entity, we need to select a field that will be used to describe the entity in the UI. 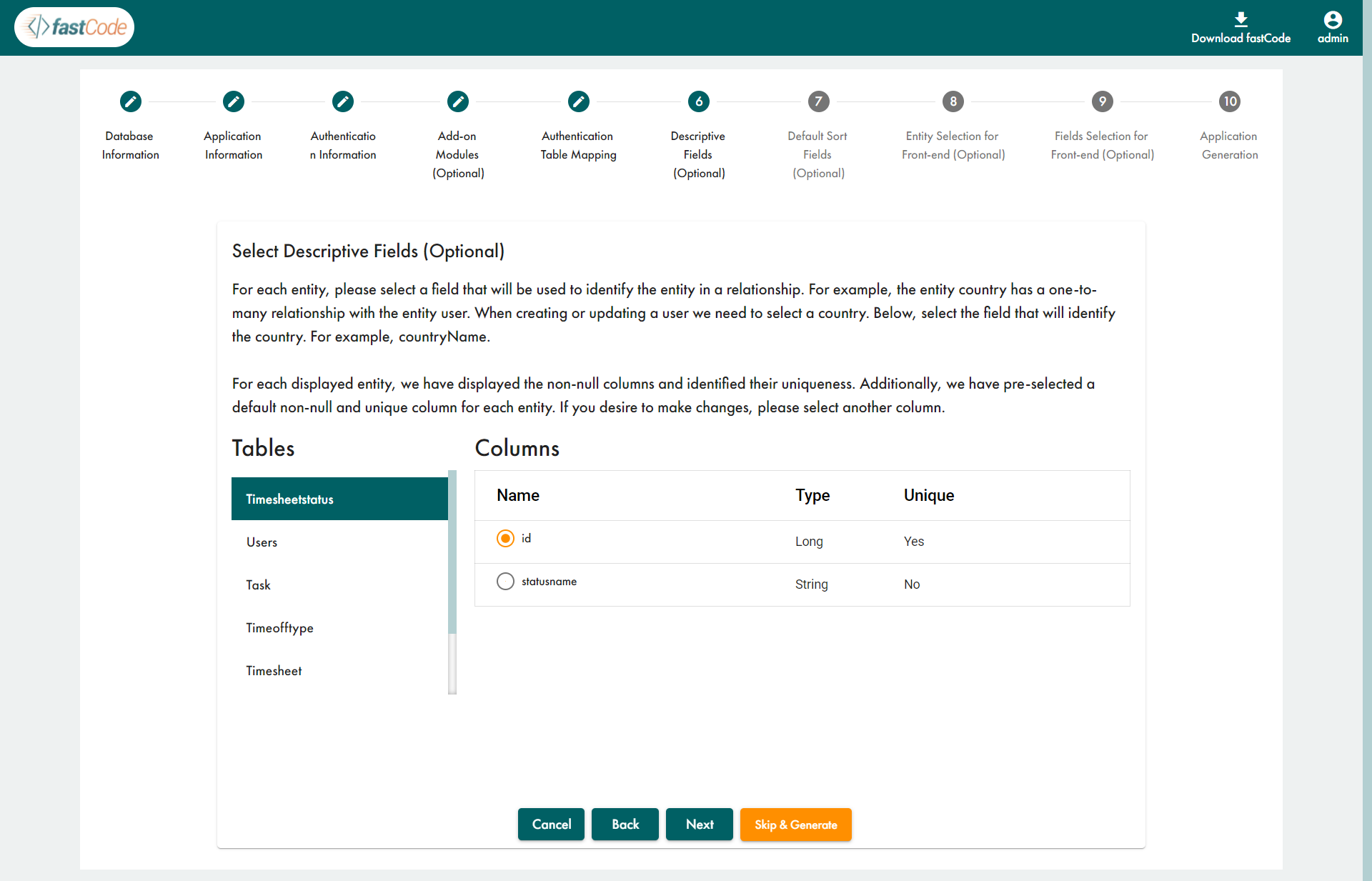 The descriptive field is also used for navigation. For example, when we click on a specific role in the UI, it lists all the permissions that are associated with that role. In the breadcrumb of the UI, the role is displayed using the descriptive field for the Role we have selected in this step. 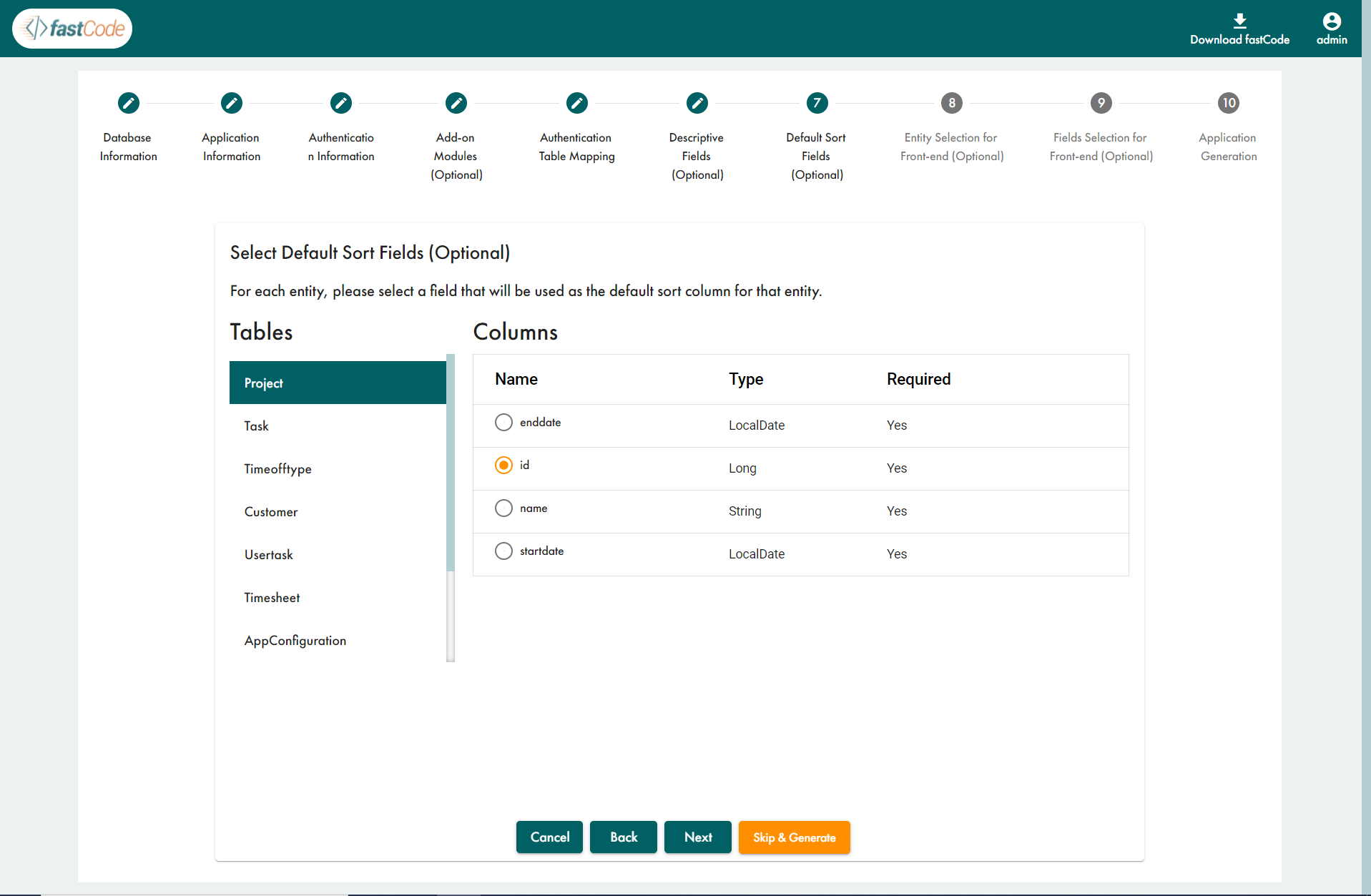 An entity is a Java (Java persistence API) representation of a database table. 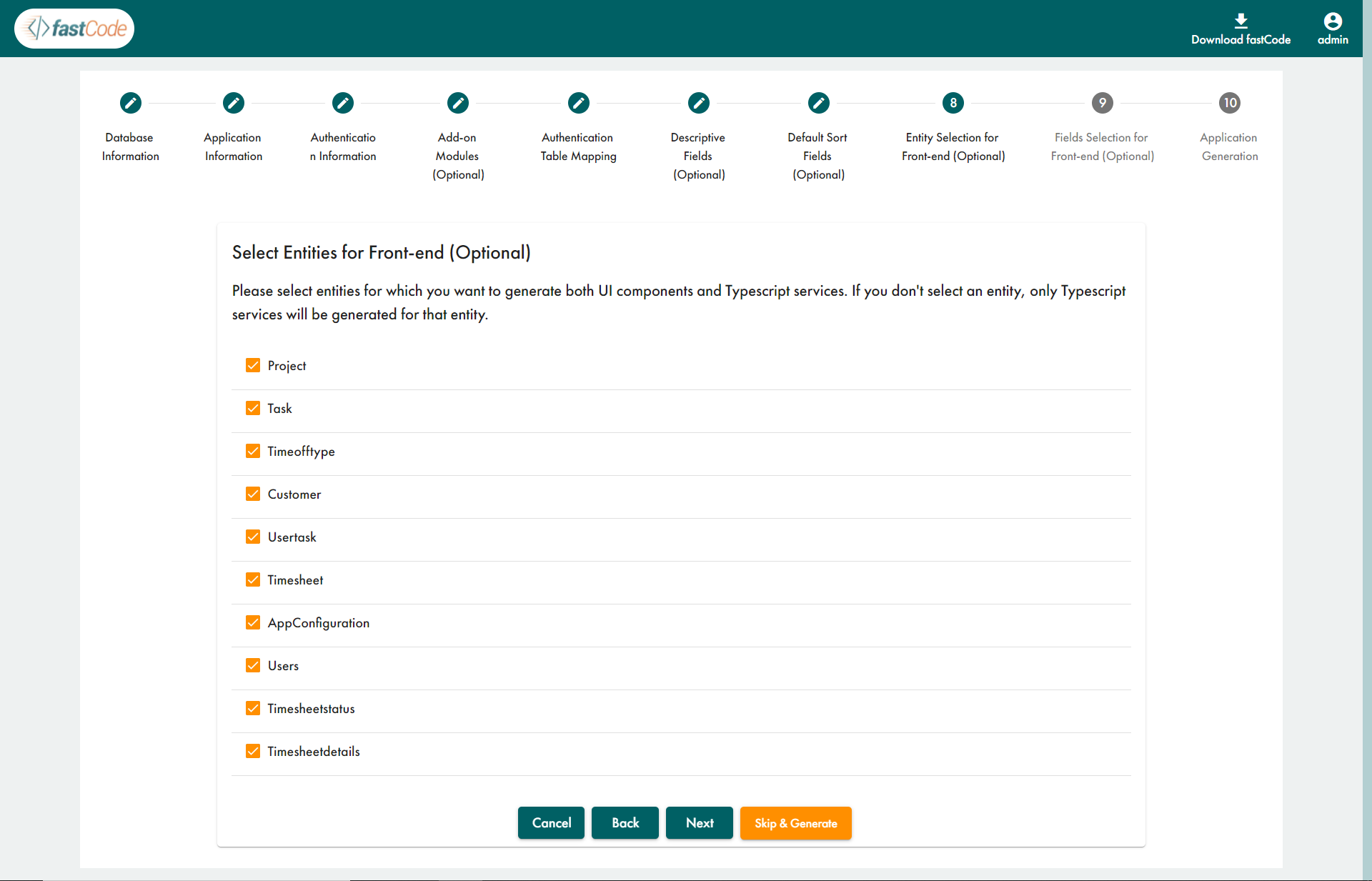 Typically, you want to generate both the UI components (and TypeScript services) for an entity if you need separate screens to perform CRUD operations on the entity. Typically, these entities will correspond to lookup database tables such as a list of countries.

As an example, if your database has 100 tables, around 20 of these tables could be look up tables. You need a way for your application users (perhaps in an admin role) to be able to update the data in these lookup table. Therefore, you would generate UI components for entities corresponding to these 20 tables.

The rest of the 80 tables don’t need CRUD screens. Instead, there could be, for example, 20 custom UI screens and each of these custom UI screens could be performing CRUD operations on more than one table simultaneously. As an example, consider a custom UI screen that has a form. Let’s assume that fields of the form correspond to fields from two different database tables. When the form is
submitted, the system needs to save the values of some fields into the first table and the values of the other remaining fields into the second table. To make this happen, you would custom develop this form, create a TypeScript service that would be called when the form is submitted, and within this
TypeScript service, call the Create TypeScript service for each of the two entities that have been pre-generated by fastCode Application generator.

Therefore, in this step, for each entity, de-select the fields where we either don’t want to display in the entity list UI screen or don’t want to gather user input for the create/update screens. 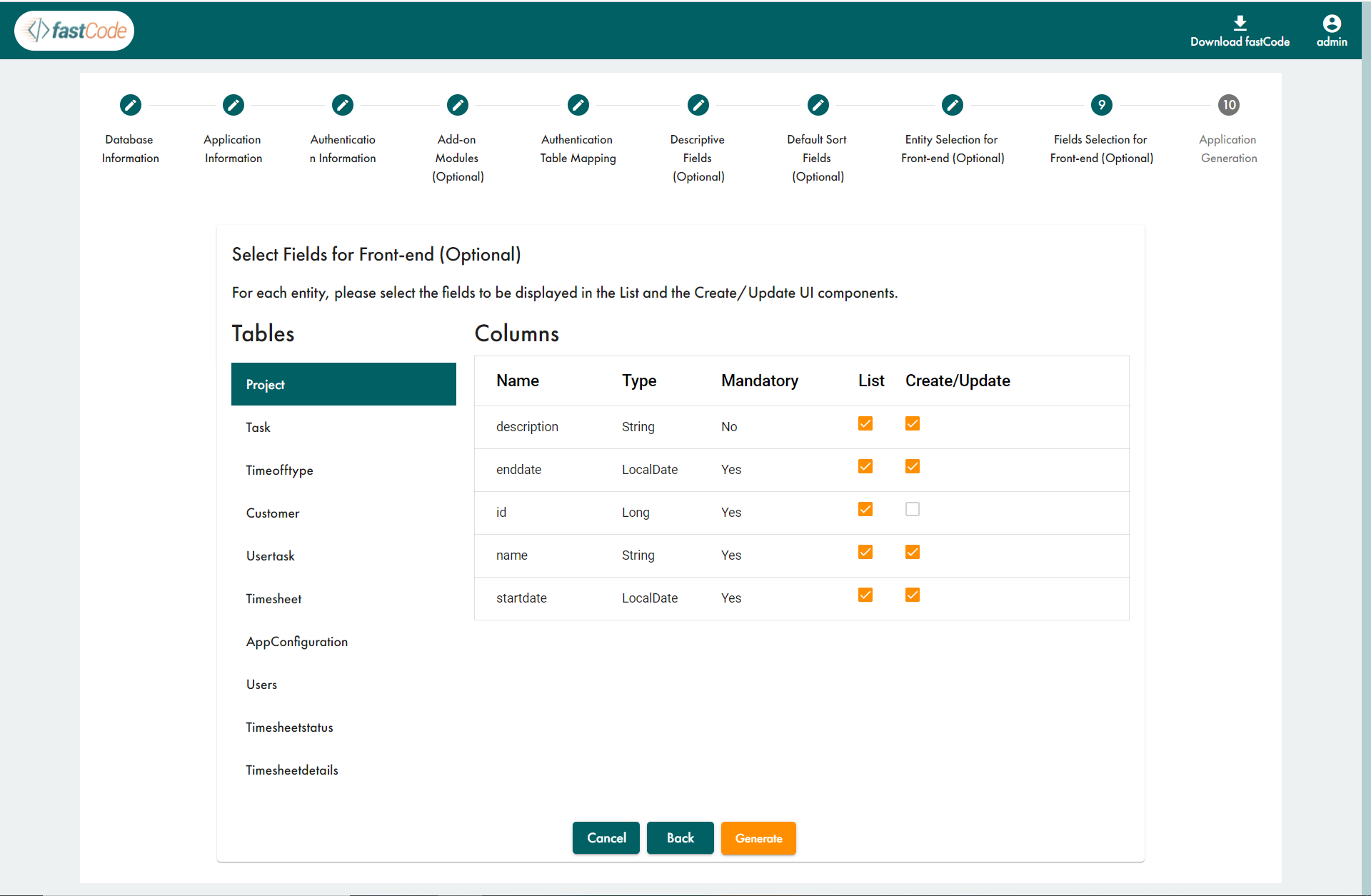 Finally, click on the orange Generate button to start generating the application.

The number of lines of code and tests generated for the front-end and back-end is displayed to the right of the screen.

Once the application is generated, click on the "Go back Home" or the fastCode logo in the upper left corner of the screen to back to the Application Generator Portal screen.